Alright, folks. Cleverness caps on. Time to impress me.

Honorable Mentions: "Don't Answer The Phone! Don't Open the Door! Don't Eat The Shellfish!" (Courtesy of newcomer Madgestic), NOOOOOOO, "I wanted to kill Osama Bin Laden" (Courtesy of Rachel [f.g.i.]), "Hello, fellow LAMB. Just wanted to let you know that The LAMMBYs are coming up and we are hoping for the best voter turnout for the nominations ever. Every Lamb #1-900 is eligible to vote (and to win!), and that includes you. To participate, please go to this site: http://www.misterpoll.com/polls/521956 Thanks!" (Courtesy of Max).

This week's winner won because she did exactly what I had hoped for with this particular capture, noticed the seductive manner in which Ghostface was lying, and played it up!

You know, Ghostface, if you stopped trying to kill Monica from Friends and the girl who had lesbian sex with Denise Richards in Wild Things, some girl would probably find that mask pretty sexy.

This week, I'm going the television route. I've been pretty much consumed with Battlestar: Galactica for a few days, so, I'd thought I'd share my current obsession with you. 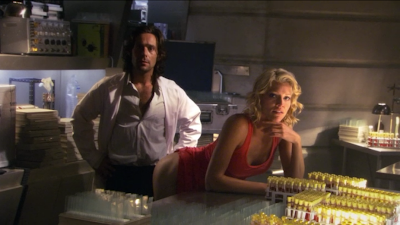 Amuse me!
Posted by Sebastian Gutierrez at 5:00 AM