Hatter Ryan over at The Matinee is part of the small, but proud camp that didn't think Moneyball was all that. So, he and I shot a few e-mails back and forth and got into some good natured spats over the whole thing. Enjoy! 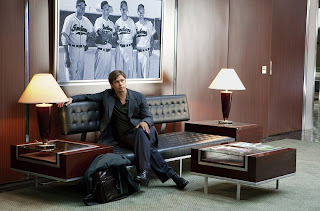 Posted by Sebastian Gutierrez at 9:00 AM No comments:

Oscar season has just begun, and already three films from the last weeks have found comfortable places within my top ten. I thought now would be as good a time as any to list off my current favorites of the year, 2011. Enjoy!

*Bear in mind, this list is subject to change. So, I don't wanna be hearing no bitching in January! K? Good! 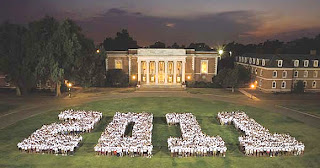 Take a Leap!
Posted by Sebastian Gutierrez at 5:00 AM 10 comments:

I'll be honest, I'm not a sports guy. Like, really not a sports guy. The only sport I really care about is swimming, and even then I only really follow it when the Olympics rears its head. I just never really enjoyed sports. Never really enjoyed playing it competitively, and never really enjoyed watching it. Sure, I'll go to a baseball game, but I'm not going for the actual game. I'm going to for the environment, to be with friends, and, not gonna lie, to enjoy a ballpark frank. Seriously, I don't know what they put in those things, but it's über addicting. It's like crack, if crack were a long, tubular, slab of beef.
...
Anyway, I've enjoyed a pretty healthy relationship with sports movies over the years. I got all chocked up and inspired with Miracle, enjoyed Rocky immensely, and relived some Indiana pride with Hoosiers (I was born in Indy, so, you know...). But, I gotta say, the sports movies I've enjoyed the most are the ones that that push the sport to the sidelines and use it as a springboard to deal with more interesting things. I probably enjoyed Coach Carter a lot more than I should have because it didn't really deal with a basketball team's rise prominence so much as it dealt with one man's struggle to reform a group of kids in a community that would be happy to see them stay the way they are. The Fighter was amazing because it dealt chiefly with the relationship between Mickey and Dicky, and how boxing effected that relationship. Hell, even Glory Road, which is a film where the sport is center stage, takes time away to deal with race issues in NCAA basketball. These types of movies aren't just great sports movies, they are great movies in general. (Ok, maybe not Glory Road.) Moneyball is that type of movie. Moneyball is a great movie!


Take a Leap!
Posted by Sebastian Gutierrez at 5:00 AM No comments:

Trailer Trash: The Girl With the Dragon Tattoo

After the pants tightening first trailer for this David Fincher adaptation, this extended, 3+ minute, beast is just what we need to whet the appetite. It shows off enough of the plot while still be keeping an air of mystery, while introducing the characters without giving too much away.

It looks sick, the actors all look to do a fine job, and Trent Reznor's music is aces! More please!


Posted by Sebastian Gutierrez at 5:00 AM 4 comments:

Tags: The Girl With the Dragon Tattoo, Trailer Trash

Do It For the Rush!

It's a sad life, a mere, non-movie star person lives. No, not because you don't have access to hordes of photographers constantly snapping shots of you, or because you don't make millions of dollars for doing next to nothing, or because the likelihood that someone out there wants to sleep with you stays comfortably where it is at less than zero. No, it's a sad life because, every once in a blue moon, a film comes along that serves as a stark reminder that no matter what you do or how hard you try, you will never be as cool as certain cinematic creations. You can try to be all dashing and roguish, but Han Solo will still beat you into the ground and steal your girlfriend. You can try to be all suave and cool and calculating, but go up against Harry Callahan, and you're toast. Beatrix Kiddo will slice you up into tiny pieces of carpaccio without batting a lash. Chili Palmer will knock you stone dead and still have time to complain about the movie industry. I could go on all day! And now, we have a new member to the pack. You may think you're all kinds of boss behind the wheel of a car, but let Driver get behind that wheel, and he will make you look like a bitch! Such is the method of the central character of Drive, the new whizz-bang, stylish as hell, ridiculously violent, masterpiece from up and coming director Nicolas Winding Refn. Words cannot adequately express how much I loved this movie, because I loved absolutely everything about it! This is a small gem that instantly rockets into my top three of 2011!


Take a Leap!
Posted by Sebastian Gutierrez at 5:00 AM 1 comment:

The review is coming tomorrow, but, just so you know, I LOVED IT TO DEATH!!!


Posted by Sebastian Gutierrez at 5:00 AM No comments:

Soundtrack on a Saturday: Speaking Unto Nations (From The King's Speech)

Tags: Soundtrack on a Saturday, The Kings Speech

Gonna keep it brief, since I'm just delaying you watching this gem, but this trailer is pretty great. The film seems to be taking on a very Cellular feel, with a normal person shoved headfirst into a crazy and life-threatening situation, the only difference being is that here the person is a crazy NYC bike messenger.

JOGO's in it, and so is Michael Shannon! I'm in all the way. This movie looks awesome!

In Other News: Expendables 2 Casting

Man, Stallone. You really are going all out. Makes me wonder what you were doing on the last film.

Yes, as pre-production gets a-rolling on the sequel to Sylvester Stallone's ode to men, muscles, and magazines (gun magazines), casting news has started seeing the light of day.

And, gotta say, it's sort of cool.

First we got the news that Bruce Willis and Arnold Schwarzenegger were back, but in real, ass kicking roles, and not the pathetically over hyped cameos that they had in the first movie.

And now, it's being reported that both Chuck Norris (cue a joke) and Jean-Claude Van Damme are in. So, not only do we have Rambo and Frank West, but we also have The Terminator, John McClane, The Muscles From Brussels, and... Chuck Norris, who is the only person in the world who can roundhouse kick a salesman... OVER THE PHONE!!!

It's also being rumored that John Travolta and (brace yourselves) Nicolas Cage are gonna be along for the right.

Now, am I the only who is impressed by this? Especially since the Expendables seemed to be pretty light on the whole, "Old School Action Star" thing. I mean, when it comes down to it, the only real "Old School Action Stars" in the film that actually did anything were Stallone, Jet Li, and Dolph Lundgren. Jason Statham is too recent, Terry Crews is more of a comedian, and, as far as I know, Randy Couture had never acted in anything before The Expendables.


So, to see Stallone firing on all cylinders bringing in all this muscle (literally) is kind of... well it gets me excited in interesting ways.

The only way this could be any more enticing would be if he got The Rock, Kurt Russell, and, I don't know, Vin Diesel. I mean, at this point, resurrecting Bruce Lee doesn't seem so impossible.

What? A guy can dream!
Posted by Sebastian Gutierrez at 5:00 AM 2 comments:

At this particular theatre, I was by myself. Flying solo. You know how it is. To that end, there were a few seats between me and the person next to me. About half way through the movie, right about where all the looting and chaos is going down, the person next to me coughed. I almost ran for my life! Why? Cuz Contagion got to me in a way a virus thriller never has. This is a smart, terrifying, absolutely believable piece of pandemic pandemonium. With strong performances, slick direction, and a chilling atmosphere, Contagion will convince you to never touch anything... or anyone... ever... again!


Take a Leap!
Posted by Sebastian Gutierrez at 5:00 AM 4 comments: 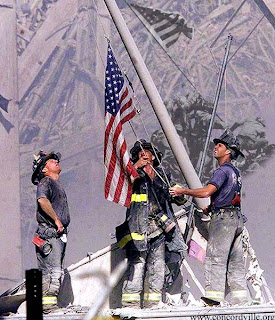 So, with this in mind, I present to you The Fun In The Sun Awards for Summer 2011! Take a leap and enjoy! 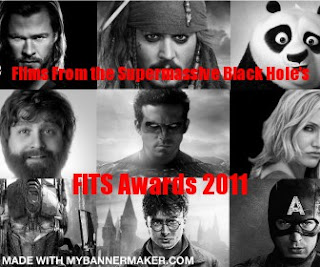 Living In the Dark Ages

I'm sorry folks, but The FITS will have to wait. Leon Botstein has to get his act together!

Posted by Sebastian Gutierrez at 2:00 AM No comments: