Posted by Sebastian Gutierrez at 3:00 PM No comments:

So, I just came from a performance of War Horse in NYC.

War Horse just might be the best thing I've ever seen in a theater, and that includes a children's theatre production of Babar!

It is an absolutely incredible show, with stunning imagery, beautiful performances, and full to bursting with emotion and heart. This is one that will be on my mind for the foreseeable future, and one that I will instantly recommend to anyone.

Steven Spielberg! DO! NOT! SCREW! THIS! UP!! 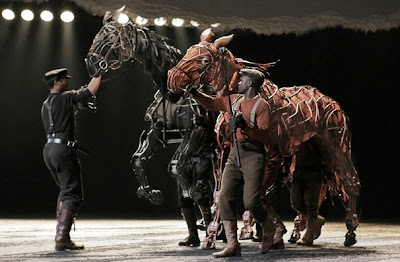 Posted by Sebastian Gutierrez at 5:00 AM 2 comments:

So, I guess the new fairy tale on the block to receive the live-action remake treatment is Snow White, as we have, not one, but two takes on the classic tale coming down the pipe.

First we have Snow White and the Hutsman, which initially looked exactly like Red Riding Hood, i.e., a teen angst fueled "interpretation" of a classic fable. While the inclusion of Kristen Stewart brings some of that in, the rest looks surprisingly well done. We have Charlize Theron playing head bitch as the Queen, and Chris Hemsworth as the titular huntsman who tracks down Snow White and apparently joins her cause. This looks to be a decent, high adventure, with plenty of battles and fantasy.

And then we have Mirror, Mirror. Uh... ok? Where to begin with this one? This looks terrible. Absolutely atrocious! Very disappointing when you consider who'd involved. It's being directed by Tarsem Singh, who just gave the highly entertaining Immortals, and stars Julia Roberts, Sean Bean, Lily Collins, Nathan Lane, and Armie Hammer. Despite all that goodness, this movie looks awful. It seems they are going for a bubbly comedy, but all the jokes here suck, big time! It's not even visually interesting, which, given Singh's involvement, is really shocking. Not looking forward to this one.

I can't believe I'm more excited for a movie starring Bella Swan than a movie staring Ned Stark, but... oh well. C'est la vie!
Posted by Sebastian Gutierrez at 5:00 AM No comments:

Sweet, merciful antichrist, I have sucked this month. Well, sucked at adding stuff to this site, not sucked in general. Well, maybe that too. Depends who you ask.

What with directing a show, starting practice for swimming, course loads, obscene lack of sleep, and college night life, I have legit just forgot to write stuff. And I apologize. I'll do better... I hope.

Ok, on to the review.

I was watching Your Highness today and for some reason I don't entirely understand, it got me thinking of what movies stand a chance of being nominated come Academy Awards time.

It was probably because I thought that there was no way a piece of shit like Your Highness would ever be nominated. Yeah, that was probably it.

But it did get me thinking. Less than two months are left in the year, and there are still a whole slew of movies that have yet to see the light of day. Though "Oscar" season is in full swing right now, it is far from over, with more than a handful of potential candidates queued up. And yes, a post like this is nothing new. Everyone does one of these. But, just give me a chance, and I'll do my best to impart some 19 year old wisdom on you.

Take a Leap!
Posted by Sebastian Gutierrez at 5:00 AM 9 comments: