Well, I guess it's that time of the year. You all know what I'm talking about. That point in the year where nothing interesting is coming out, and the studios think it's prime pickings for the latest horror reboot. We saw it last year with Friday the 13th, The Last House on the Left, and Sorority Row. All these remakes of classic slasher films coming out here and there, and it makes me wonder. Do the people making these new versions ever see the originals? I mean, sure; of course they have, but it seems as if they don't retain anything. Whenever filmmakers make these reboots, they discard everything that was special about the originals, whatever that may be, and, instead, fall back on cheap scares and cliched scripting. A Nightmare on Elm Street is no different, but with one major reservation. I just want to get this out of the way. There is one really good aspect of this new Nightmare! So good, in fact, that it makes the entire movie worse when you realize that everything else in this Michael Bay produced train wreak sucks by comparison to this one thing. 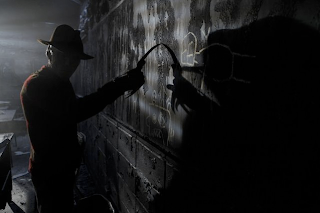 Freddy certainly knows how to torture.
Take a Leap!
Posted by Sebastian Gutierrez at 11:11 PM 4 comments:

Is there such a thing as hope? Maybe. I think with a director who actually gets the whole vampire genre, The Twilight Saga: Eclipse might be able to offer enough for people like me as well as appealing to all those fangirls out there. It appears that David Slade is bringing some of his 30 Days of Night experience to the project, and all I can say is, THANK GOD!! Yes, Twilight is romantic, emo bullshit, but that doesn't mean it can't be mature, romantic, emo bullshit. Just because it's aimed at teenage girls doesn't mean elements that us other, sane people enjoy can't be included. Watch the trailer down at the bottom, then compare the footage there to this scene for 30 Days of Night. There are some similarities, to be sure. I know it's pointless to hope that Eclipse will actually be good, but maybe it will be adequate enough to get a grade higher then a D from me. We'll see in June.


Disclaimer: This clip is bloody as hell! You have been warned.

Posted by Sebastian Gutierrez at 11:43 AM 4 comments:

So, let's talk about superheroes. They are cool, calculating, stylish, and can kick your ass. So, why they do they always need to be so serious? I mean, come on. The stories of superheroes are some of the cheesiest in the biz, so why do they need to be so god damn morose about it? Well, fear not, because there's a new kid on the block, one that fully knows how ridiculous the whole caped crusader thing is, and seeks to knock it flat on its' face. Kick-Ass is a parody, of sorts, about everything superhero that sees normal people donning costumes and fighting crime. It's Watchmen, only without the meaning, subtlety, or any level of maturity what so ever. Kick-Ass is vulgar, depraved, senseless, and, on occasion, kind of sadistic! It's awesome! 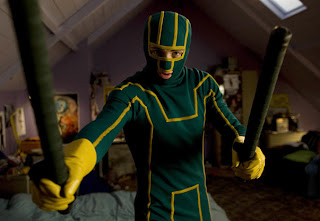 Take a Leap!
Posted by Sebastian Gutierrez at 7:52 PM 4 comments:

You may not know it from reading this blog, but film isn't the only thing that entertains me. I am an avid follower of any type of performance art. Theatre, music, and spoken word are just as interesting and provocative as any movie out there. In this mix, television is the one that usually gets kicked to the curb. TV serials usually aren't taken all that seriously, and are often viewed as cheap, fast entertainment. Don't get me wrong, there are a lot of good shows out there. South Park has stayed consistently funny for 14 seasons, Lost continues to baffle the mind as well as thrill the heart, and Glee has managed to successfully translate what amounts to a Broadway musical into small, weekly episodes. (By the way, if you don't watch Glee, you totally should. It's amazing!) One of my favorite new shows just ended its inaugural season. This show in question could not be more different from the shows I just mentioned. Aimed specifically at adults, this show spills gallons of blood and undresses countless women per episode. I am, of course, referring to Spartacus: Blood and Sand, the new powerhouse series on Starz. The season finale only aired a few hours ago, so I thought now was as good a time as any to lay it on the line. Is this "historically accurate" portrayal of Roman culture worth seeing? You bet your ass it is! 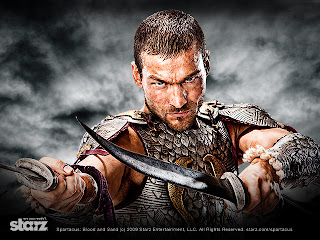 Take a Leap!
Posted by Sebastian Gutierrez at 12:55 AM 5 comments:

Taking It Too Far

I am shocked! I am appalled! I am enraged! Now, look. No one enjoys a sex thriller more then me. Your brain gets teased, you see some good performances, and some lovely ladies usually shed their clothes, which is only icing on the cake. Films like Fatal Attraction and Unfaithful are stalwart examples of the genre. It's been awhile since we've had a good one though. The new film, Chloe, seeks to fill the void. Now, not only does Chloe fail at filling that void, it also fails as a movie, just in general. Here is a film, so pointless and stupid, that not even the most overly generous of critic will be able to find something to like. This critic does not consider himself to be overly generous. This is going to be fun! 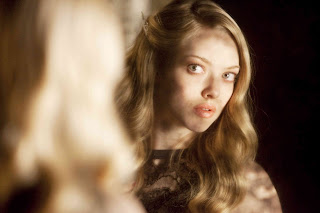 Take a Leap!
Posted by Sebastian Gutierrez at 10:47 PM 2 comments:

Uggg, that was disappointing. I actually had some hopes for Clash of the Titans. I mean, it stars Sam Worthington, who, with Avatar, has proved to be a legitimate star, and it's based off an 80s classic staring Laurence Olivier and a stop motion Medusa. Now, we have the remake, and oh, how far society has fallen. 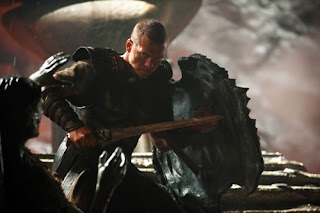 Take a Leap!
Posted by Sebastian Gutierrez at 12:13 AM 1 comment:

Rock music, like it or not, is one of, if not the, most enduring art forms out there. There's always something to be said about the type of people the medium attracts, from the drugged out creeps, to the bizarre and out of this world weirdos, and I mean that in a good way. Seriously, the best bands of all time fall into the category of rock. So, why has there never been a really good movie about a rock band? (No, Spinal Tap doesn't count.) It seems that rock music can tell great stories, and attract a colorful cast of characters, but when it comes to translating all this to the screen, it leads to almost universal failure. Now, we have The Runaways, and, while it's a huge step in the right direction, the rock biopic still has a ways to go. 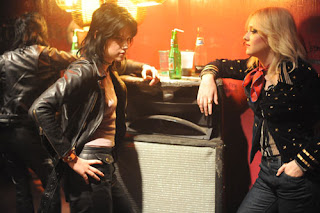 Take a Leap!
Posted by Sebastian Gutierrez at 10:42 PM No comments: